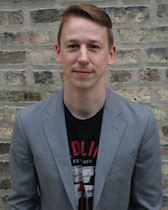 Thomas received his Ph.D. in Japanese Literature from Columbia University in 2016. His research interests are primarily in early modern Japanese literature, media, and society, with a focus on the role played by literature in conceptualizing urban space and the identities that it engenders. His research is also concerned with the mutual implications of literary history, material histories of the book, interpretation, and social history. His current project examines the ways in which different genres of popular narrative fiction registered and reflected upon shifts in the discourses and practices structuring urban commoner identity between the late 17th and 19th centuries. His other primary research focus is media theory and history, especially the history of commercial publishing in Japan and media-theoretic approaches to the woodblock-printed book.

Thomas’s teaching interests include premodern Japanese literature and book history; literature, media, and culture of the Meiji era (1868-1912); advanced Japanese, classical Japanese, and handwritten script; interdisciplinary and comparative approaches to urban history; and the history of and critical approaches to digital games in Japanese and global contexts.