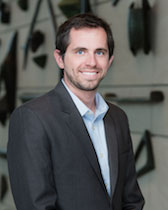 Daniel Majchrowicz (Ph.D. Harvard University, 2015) is Assistant Professor of South Asian Literature and Culture. His research considers the history and culture of Muslims and Islam in South Asia with an emphasis on Urdu literature, travel writing, popular culture, and language politics. He is a translator from Urdu, Hindi, Punjabi, and Persian, and currently the director of the South Asia Research Forum.

His current research project is The World in Words: Travel Writing and the Global Imagination in Muslim South Asia, a study of South Asia’s global imagination as it was expressed in Urdu-language travel writing from 1840 to the present. The book argues that vernacular travel writing was a broadly ecumenical genre that let Indian travelers not just to describe the world as they found it, but to imagine it as they wished for it to be. Opening up this vast South Asian travel atlas, The World in Words introduces a new literary genre, unlocks new forms of literary subjectivity from long-ignored voices, and reveals new modes of circulation, mobility, and connection between India, Asia, and Africa.

Two related book projects have emerged from this focus on South Asian travel writing. The first is A Tent of One’s Own: Three Centuries of Travel Writing by Muslim Women (Indiana University Press, 2022), co-edited with Siobhan Lambert-Hurley and Sunil Sharma. This book, which was the recipient of a three-year grant from the Leverhulme Foundation, argues that travel was a key site at which Muslim women negotiated their relationship to Islam and the Muslim community. The book contains original studies, along with excerpted translations, from some forty-five women travelers. The second, Seeking Sisterhood: An Indian Muslim Woman’s Global Search for Sorority and Solidarity, is a study and translation of Begum Sarbuland Jang’s 1909 travel diary, Duniya ‘Aurat ki Nazar me.n. The book asks how she used her travels to find community with Muslim women beyond India across linguistic and class barriers.

His next project is Hindavi: A Global History of a Regional Language, which traces out the global spread of Hindi/Urdu in nineteenth and twentieth century to ask how this complex configuration of language, empire, and race shaped the world and gave birth to our own contemporary economic and linguistic order.

The World in Words: Travel Writing and the Global Imagination in Muslim South Asia. Under review.

“Fingernails Torn from Flesh: Intiz̤ār Ḥusain, Rām La‘l, and Travel Writing across the India-Pakistan Border” in the Journal of Urdu Studies, October 2020.

“Traveling to Acquire Knowledge,” review of Islam and Travel in the Middle Ages (Houari Touati). Marginalia: Los Angeles Review of Books. May 27, 2014.