Ph.D, University of California at Berkeley 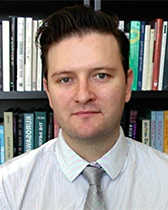 He is the author of “The Alterity of Cinema: Subjectivity, Self-Negation, and Self-Realization in Yoshida Kijū’s Film Theory” (The Review of Japanese Culture and Society, December 2010) and translator of the documentary filmmaker Hara Kazuo’s memoir Camera Obtrusa: The Action Films of Hara Kazuo (Kaya Press, 2009). He is currently working on a manuscript titled “Our Dissolution:” Subjectivity, Collectivity, and the Politics of Form in 1960s Japan, which examines how the theorization and representation of subjectivity, across literary and visual media, both enabled and foreclosed the possibilities of political action in the Japanese 1960s.