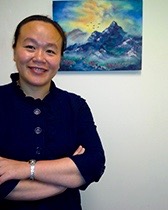 Jili Sun received her B.A. in French literature at Guangdong University of Foreign Studies (previously Guangzhou Institute of Foreign Languages) in the P.R.C.. She received her Maîtrise in Teaching French as Foreign Language in University Jussieu (Paris VII) and her M.A. (DEA) of Second Language Acquisition and Pedagogy at University of Sorbonne Nouvelle (Paris III) . Her thesis title was "Comparison of Narrative Cohesion in French and in Chinese in the Case of first and second Languages".

She conducts research in second language acquisition and pedagogy, interaction between language and culture, and analysis of narration. She is also interested in religious studies, and has received a DEUG degree in studies of Christianity in Institute Catholic of Paris.